As I sat down to write December’s blog post, I was confident my thoughts would flow from my heart to the keyboard as quickly as King Kong fell for Fay Wray. After all, the subject I had chosen had a profound effect on the pre-adolescent psyche of a skinny North Carolina preteen who loved to read about the strange and macabre. I’m talking about the father of modern-day science fiction fandom, the late-great Forrest J Ackerman. (Note the lack of a period after the “J”…that’s no typo, that’s the way 4E referred to himself).

Since the anniversaries of Uncle Forry’s birth and death occurred since my last blog post, my intent was to write yet another tribute to a man who legitimized the science fiction genre and paved the way for countless writers, directors, special effects artists, and fans to make significant contributions to the world of entertainment. But what could I say that hasn’t already been said in numerous tributes, eulogies, and memorials? So, I’ll simply tell you what the man meant to me. But first, you’ll need just an inkling of background on Forry.

Forrest J Ackerman (November 24, 1916 – December 4, 2008) fell in love with science fiction in 1926 on the day he read his first science fiction story in a copy of Amazing Stories magazine (founded by Hugo Gersback, the namesake of the Hugo Award). From then on he was a great proselytizer on behalf of the genre, proclaiming his love and converting others to the ranks of fandom. He formed one of the earliest science fiction clubs in Los Angeles and brought his young friend Ray Bradbury, then an unknown writer. Later, he edited and published Bradbury’s first story. The result can be summarized in Bradbury’s own words, “If there was no Forry, there would be no Ray Bradbury.” He later acted as agent for a host of up-and-coming science fiction writers and nurtured the careers of Bradbury, L. Ron Hubbard, and Ray Harryhausen.

Have you heard of the Ackermansion? During his lifetime, he amassed the largest collection of science fiction, horror, and fantasy memorabilia of all time (some 300,000+ items that included movie props, books, still photos, and autographs) that he kept in his 18-room house dubbed “the Ackermansion.” Forry would gladly give tours to fans and curiosity-seekers. The maquettes from the original King Kong…Bela Lugosi’s cape…Ray Harryhausen’s models from War of the Worlds…every prop, script, autograph and model had a story that Forry loved to tell. Sadly, he was forced to sell part of his collection near the end of his life to pay for his mounting medical bills. After his death, the collection was further broken apart and auctioned by Joe Maddalena of Profiles in History, the company featured on the SciFi Network’s Hollywood Treasures. 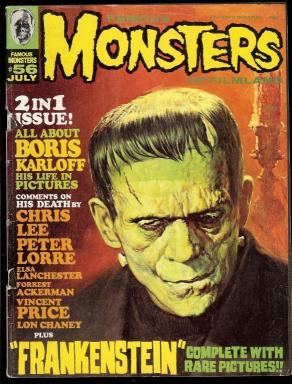 Forry may have made the greatest impact through the pages of a pulp magazine he launched in 1958. Famous Monsters of Filmland (FM) was a publication dedicated to showcasing the science fiction, horror, and fantasy movie genres both past and present. It was through FM that I was introduced to Uncle Forry, during my formative preteen and early teen years in the late seventies and early eighties. Star Wars, Raiders of the Lost Ark, Alien, Jaws, Close Encounters of the Third Kind, Clash of the Titans…they were all there in glorious black and white print. And it wasn’t just the latest hits that were between the covers of FM. Forry made sure my generation was versed in the classics as well. I learned to love and respect the giants that paved the way for the modern blockbusters, like the classic Universal film monsters and the men behind their scowls: Bela Lugosi, Lon Cheney, Jr., and the great Boris Karloff.

Not every movie that graced the pages of FM was Oscar-worthy, but Forry loved them all nonetheless. If it was sci-fi, it was qualified for page time, no matter if it was Ed Wood’s Plan 9 from Outer Space or Steven Spielberg’s ET-The Extra Terrestrial. Forry was an advocate for the genre. Period. But the best thing about Famous Monsters?  The wit and passion of Uncle Forry himself was infused in every issue, including his penchant for puns, his gratitude for his fans, and his genuine love for the art and craft associated with making genre movies.

It was through FM that I learned about the men behind camera—the directors, special effects artists, makeup artists, and writers—and the tremendous amount of time and talent needed to produce a quality film. I marveled at the spacecraft models created for Star Wars, the stop-motion animation of Ray Harryhausen, and Rick Baker’s creature effects. To say FM stirred my imagination is like saying Godzilla was just a little perturbed.

Before you think I’m as mad as Vincent Price in House of Wax for allowing a pulp magazine to shape my childhood, please realize I wasn’t the only one that was influenced by the great 4E. A regular who’s who of artists credit Forry for helping provide the inspiration that led to their star-studded careers: Stephen King, Steven Spielberg, George Lucas, Peter Jackson, Joe Dante, Tim Burton, Frank Darabont, John Landis, Danny Elfman, and many, many others. If Uncle Forry accomplished nothing else, he provided us with a generation of entertainers fused with the mystical energy needed for a lifetime of creativity.

Some little known facts: Uncle Forry was perhaps the inventor of cosplay, the extremely popular practice of dressing as your favorite character from the world of pop-culture. It happened in 1939 when Forry and a friend attended the first World Science Fiction Convention in Manhattan dressed in spacesuits. And did you know he is widely credited with coining the term “Sci-Fi?”

So what else can is there to say about Forrest J Ackerman? Much more, I must admit. But for the sake of brevity, I’ll wrap it up. Perhaps I (and legions of other sci-fi fans) still miss Uncle Forry because he was one of us. He wasn’t untouchable and he didn’t possess an overwhelming talent for writing, directing, or creating special effects. He was simply a fan—albeit the original super-fan—and an appreciator of the art form we know as science fiction. He was every dreamer’s favorite Uncle. And best friend.