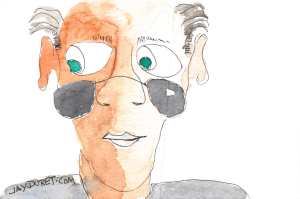 Her tee shirt said, “as we get older we get faster in our youth.” She ran carefully but briskly down the sandy trail. Her hair was pulled behind her head with a rubber band. She wore running shorts and a beaten up pair of Nikes. The trail she was running on ran through a pine strand and the sand kicked up gently and efficiently behind her as she moved. Her face had that lack of expression that runners wear when they have moved through the beginning of their run and settled into the steady beating rhythms of their body. She held her hands in shallow cups and they extended slightly in front of her body keeping rhythm with her legs, her hands pulling cupfuls of air and loosing them behind. Spare. Efficient. Forty years old.

The trail began to slope and she had to work. Her body leaned into the rise and pumped harder the way a car rises within a gear before demanding to be shifted. She broke rhythms for an instant to wipe her forehead with the back of her wrist. For the first time there was expression on her face but nothing more than determination to keep her speed on the hill. She had a black plastic watch on her wrist but she didn’t look at it.

“As we get older we get faster in our youth.” The phrase was like the woman. Realistic, but not grim. Purposeful. This was a purposeful run through the pine scrub and sandy loam. It was day’s end and the day’s sun had lost its driving heat. The light had softened. The sounds were like the light. A fog horn miles in the distance. The gentle thud and scrape of her Nikes on the trail, a cadence as measured as the ticking of a clock. Her breathing deep but even.

At the top of the slope the pine scrub ended and now she was in a field of high brown grass. The path was narrower here, more efficiently trodden. The dry stalks of grass rasped against her brown legs and her nylon running shorts.

Ahead on the right there was a couple holding hands and walking towards her. The trail was too narrow for them to walk abreast and so the boy walked ahead. The way he held the girl’s hand made it seem like he was leading her on some dangerous journey over unreliable terrain. The boy had on a tee shirt that said “Naked Coed Lacrosse” and his face was very red. The girl had long blonde hair in a pony tail. She was wearing a sleeveless peach colored shirt and on one shoulder the strap had slipped askew and a band of very white skin stood out against her sunburn.

They couple stepped into the tall grass as the runner neared them but they didn’t look at her. “It’s going to be fine,” the boy was saying.

“Will you stop saying that please. Its not fine,” the girl said, her voice surprisingly high and insistent, “it isn’t, it just isn’t.”

The woman ran harder as she passed them. A look of pain or disgust or annoyance spread over the boy’s sunburned face and he turned to the girl just as the woman ran past. But the boy’s movement had turned his hip into the path and it caught her hard just at the top of her own hip and suddenly she was knocked into the long grass out of control, legs overextended, arms flown up, the grass dense and resistant and loud like paper tearing and she couldn’t see her feet or find the ground’s grade in her mind. But she balanced herself and leaned forward and didn’t fall.

She came to a stop and looked back. She had gone fully twenty feet into the high grass and the angle of her departure from the road was revealed for an instant in the parted grass she had left behind.

The boy and the girl turned to look at her, their red faces impossibly young. The boy yelled something. An apology lost in the wind and the sound of her own panting. She bent over at the waist and put her hands on her knees looking down into the grass.

When she looked up again the couple had turned back to each other and the wind swept away their voices so she couldn’t hear what they were saying. She walked slowly back to the trail and began walking in the direction she had been running. After a few minutes she began to run again.

Jay Duret is a San Francisco based writer and illustrator. Second Wind published his YA novel, Nine Digits, in December. Follow his daily posts at www.jayduret.com/illustrations/facecards.