Spooked by Spock by Chuck Thurston

After the last of the Halloween trick-or-treaters had passed through our neighborhood last fall, my wife and I watched our movie, The Fog. It has since been remade but we had the 1980 version with Adrienne Barbeau (Yowzah), Janet Leigh (Hotcha), Jamie Lee Curtis (Humma humma) and Hal Holbrook (damn good actor).

It had enough scary moments to round out a nice Hallowed evening and we talked about it afterwards. “What’s the most frightened you have ever been?” my wife asked me.

That is a really tough question. There are all kinds of potential frights in life, and they vary among individuals. Some years ago, I was commuting to a job in Poughkeepsie from Owego, New York. This is one of those “you can’t get there from here” deals, so everything got routed through LaGuardia. The Poughkeepsie to LaGuardia hop was so short that the attendant began taking drink orders while we were still taxiing out to the runway. The man next to me told her, “I am afraid of flying! I want three Irish Creams – and I would like them now!” She didn’t argue the point and brought them to him shortly. He downed them one after another as the plane took off.

For parents, a whole new category of worries is at hand. You have sleepless, restless nights if they have missed a curfew. A siren in the night or an unexpected phone call after hours can be a terrifying.

There are also the sudden, unexpected scares that take our breath, make us feel that our heart has stopped – thought things over – and thrown in a couple of extra beats. I pondered my wife’s question and said, “I don’t believe I have ever had more hair raising experiences than the ones I had with Spock.” She nodded understanding.

We moved south in the spring of ’79. I came down to interview and took the job at IBM. After we did some house hunting, I stayed on to work while my wife returned to the old homestead until our daughter finished her school year.

The subdivision was a new one. Most of the lots were raw red earth laced over with kudzu. There were only two or three completed houses – there would eventually be over twenty. Our house-in-progress was directly across the road from one of the few occupants. I dropped by now and then to check on progress and occasionally camped out in a sleeping bag on the bedroom subfloor.

On an early visit I made my first contact with this sparsely settled neighborhood’s resident guardian. An incredibly large, black animal – frothing at the mouth is no exaggeration – came bounding in a powerful gallop across the road toward me. I was between my car and my front door with no chance of reaching either, and no means of defense. Neither fight nor flight was an option. I was preparing for the worst when the lady of the house came running across the road and introduced me to Spock. “He won’t hurt you,” were the first words I heard from my new neighbor and it was the best welcome I ever had. 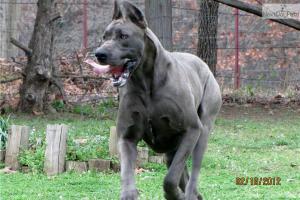 Spock was a coal black Great Dane. Karen and Rodney had named him for the pointy-eared Star Trek character. Great Danes are among the largest dogs on earth, and their gentleness and playfulness belie their fearsome appearance. Let me tell you how gentle: several months’ later, visiting grandchildren tried desperately to climb on his back for a ride. They quickly learned that he was a sucker for childish attention, with a very high tolerance for experiments of this sort. Once introduced, Spock and I became almost instant chums, a mixed blessing. If familiarity breeds contempt, it also breeds a playful urge to scare the bejeepers out of your new pal every now and then. Spock had a number of ingenious tactics to affect this.

The foundation on the southern side of our house was faced with brick. Some Boxwood bushes were planted there. The low winter sun would warm up the brick wall and Spock loved to stretch his long frame between the wall and shrubbery when the weather was cold. I used a spot behind one of the larger plantings to keep our garbage rollout container out of sight. On one of my periodic trips to take out trash, I apparently wakened Spock from one of his snoozes, and he bounded up from his napping spot. I let out an involuntary yelp as this huge form leaped up from behind the low bushes to greet me. On subsequent trips to take out the trash I learned to prepare myself for other welcomes like this.

Our new home had a fireplace and we looked forward to its cozy blaze on winter nights. I bought a pickup truck load of firewood from a local fellow, got a chopping block and axe and busied myself splitting the oak logs in the evening. I did my work on a little concrete patio in the back of the house. A single outside lamp was the only light source.

I am busy chopping away one night, when an incredibly long black form – with no preliminary woof of warning jumps into the small pool of light illuminating my labors. Spock had done it again; yet another chink in my life expectancy. But it got scarier. Spock would apply his all time favorite heart-freezing tactic to me early on dark winter weekday mornings, as I left for work. He pulled this on me a half dozen times, and it never failed to work for him. You would think I’d learn after a time or two, but I didn’t.

I drove a compact car in those days, and backed it out of our driveway to the road. As one customarily does, I would look over my left shoulder to check the drive behind me as I pulled out. And there – inches away at eye level – would be a huge, grinning, slathering, toothy face. It would take me a shocked moment to recognize…Spock!

Spock has long since passed to the great kennel in the sky, and I confess I miss him – and yes, even his hijinks – to a point, though; to a point.

Chuck Thurston is the author of the Senior Scribbles series on Second Wind.  “Senior Scribbles Unearthed: This Whole Thing Has Sure Been A Lesson to Me”; “Senior Scribble Second Dose: Take Two Of These And Keep Your Mouth Shut” – and due out this fall: “Senior Scribbles Bathroom Reader: Your Results May Vary”.  He and his wife Heidi co-inhabit their blog Twoontheaisle.wordpress.com.

2 responses to “Spooked by Spock by Chuck Thurston”