Your Truest Purpose For Existing by Pat Bertram

Once upon a time not so long ago, there was a mythical social networking site for creative types called “Gather.” I call the site mythical because it seemed uncanny and serendipitous the way so many kindred spirits migrated to the site, and also because the defunct site has disappeared into the myth of memory. Was it as special as we all seemed to think? It must have been because in its short history, it affected so many of us in a positive way. In fact, many of the people I have visited on my cross-country trip were people I met on Gather nine years ago, including fellow author Lazarus Barnhill.

Lazarus Barnhill is one of those folks who seem larger than life. Charming and charismatic, unbelievably intelligent and intuitive, and so busy he’s harder to catch hold of than a wisp of cloud. (I’m getting ridiculously eloquent here, but he tends to bring out the best — and worst — in people.)

Several years ago, I interviewed Lazarus for my blog (Pat Bertram And Lazarus Barnhill Discuss Writing as Destiny), but he, being the contrary sort of individual he is, turned the tables and interviewed me. The interview was almost embarrassingly intimate, though I don’t know why. Maybe because it was the first time we ever “talked” and he seemed interested in me at a time when my life was closing in on itself. Maybe because I was open and willing to answer his questions. Maybe because he said such insightful things about my books that I felt giddy. He seemed to see more in my works than I expected people to see, perhaps even more than I myself had seen. But that is the beauty of writing one’s truth. It has a way of making itself felt.

So what does this have to do with today’s blog post? Well, I had a chance to take a look at Barnhill’s newest book, Pastor Larsen and the Rat. The story is about Pastor Larsen, who, in the face of the drudgery, church politics and frustration that are the usual professional hazards of the ministry, is faced with a dangerous and intriguing complication — Ange. No one in Larsen’s close knit congregations knew of the existence of this woman, the daughter of a parishioner who appeared just in time for her mother’s funeral. For Larsen, Ange is more than mysterious. She is alluring, wise and astonishingly intuitive. . . . And then there is the issue of the large rat that seems to be taunting the members of his church.

This is a book that only Lazarus Barnhill could have written. A pastor turned author, Barnhill knows more than most people about what goes on behind the serene countenance of a church, but more than that, he has a talent for mixing the irreverent with the reverent, the salacious with the spiritual, the naughty with the nice.

I asked Lazarus if he were afraid people would find his book controversial. He said, “To a degree. Some will find it profane. I hope some find it insightful and hopeful. Those familiar with religious bodies — and with the way spirituality operates in human life — will not be able to deny it’s honesty — not the sex part, but the organized religion part, and the divine intervention part. Ultimately I hoped when I wrote it that non-religious people would read it for the naughty romance and gain some insight into how the holy is able to work in our midst despite all that religions do to prevent it; and that religious people would ‘force themselves’ to live with the titillation in order at last to read something truthful about their gatherings.”

A love of truth in literature seems to be something that Lazarus and I have in common. Although we want people to read our books for enjoyment, being entertaining isn’t our only reason for writing. We need to tell our truth. Lazarus goes beyond that, believing that “whatever force there is out there in creation (call it God, destiny, a Higher Power or whatever you want) actually wants you to write. When you write, you are fulfilling an essential aspect of your truest purpose for existing.”

Lucky for us, Lazarus Barnhill is fulfilling his destiny. 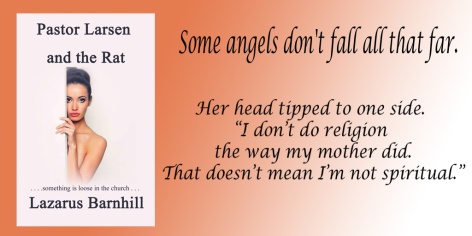 What are you waiting for? Click here to buy the ebook: Buy Pastor Larsen and the Rat on Kindle for $0.99 kindle.

Tagged as Gather, God wants us to be creative, Lazarus Barnhill, Pastor Larsen and the Rat, Writing as Destiny